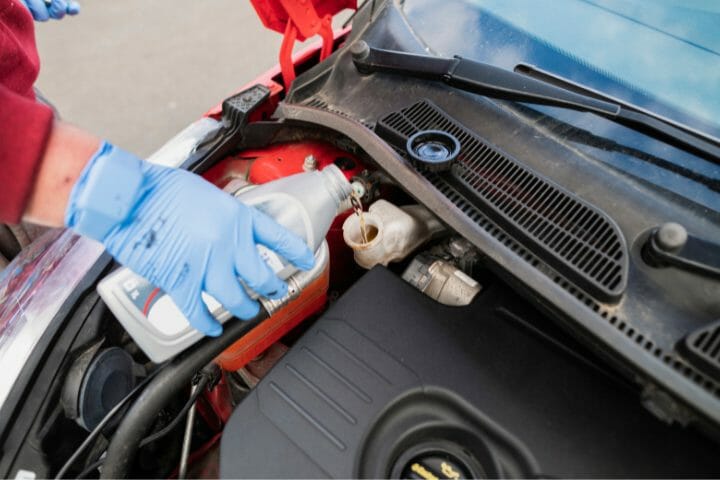 If you ever put brake fluid in gas tank by mistake, will the car still work? In this article, let us figure it out together.

But what happens when you put brake fluid in the gas tank? Well, putting in a slight amount of brake fluid will not affect the engine as it will dilute with the fuel.

You will not experience any damage immediately. Your car will run smoothly on the road. But running your car repeatedly by putting this fluid in the fuel tank can adversely affect engine components. Accidental Brake Fluid In Gas Tank: What Are The Effects

Brake fluid is an essential fluid in the hydraulic braking system. Every car owner needs this fluid to drive effectively. When you put brake fluid in a gasoline tank, you pollute the whole fuel system. Some fluids comprise silicon which can hamper the oxygen sensors of the vehicle. Now let’s discuss the short-term and long-term effects of putting such fluid in a petrol tank.

The short-term effects of putting hydraulic fluid in a petrol tank are not much noticed. But it can have a mild effect on the engine. It will start hampering the oxygen sensors in the exhaust manifold.

Remember, the hydraulic fluid works effectively only for the vehicle’s braking system. Unfortunately, it will work adversely on the fuel system. So, try to flush out all the petrol from the tank if you have accidentally put this fluid in it.

Long-term effects are noticeable. Running your car repeatedly by putting brake fluid in a petrol tank can affect the oxygen sensors badly.

The engine computer cannot set the proper air-fuel ratio when these sensors go bad. Consequently, you experience poor fuel economy. The catalytic converter gets damaged, and harmful gases are liberated directly into the outside environment.

Inhaling carbon monoxide or other harmful gases has an adverse effect on health. Some gas will also seep into your car, and you will start breathing it. Inhaling harmful gases continuously can cause vomiting and headache and, worst cases, damage your internal organs. So, it’s advisable not to put brake fluid in a car’s gasoline tank. How Much Brake Fluid is Bad?

The silicon base fluid can pollute the oxygen sensors present in the exhaust system of the car. Consequently, the mileage will be reduced, and poisonous gases will start liberating the atmosphere. It can even affect your car’s transmission, and you have to spend thousands of dollars to correct things, which is quite expensive.

So, we will advise you never to put this fluid in the gas tank.

How To Clean Brake Fluid If You Accidentally Poured it in The Gas Tank?

If you pour a small quantity of brake fluid into the gas tank, it will not affect the engine much. But still, you can reduce any adverse effect by diluting, i.e., by putting in more amount of gasoline.

But if you put hydraulic fluid in the gas tank, we will advise you to stop running the car and flush out everything from the tank.

Try to take the help of an expert while drawing the entire tank. Take your vehicle to the nearest mechanic shop, and the professional mechanic will help clean the tank. Additionally, they will replace the fuel filter with a new one.

Other Things That Can Ruin Your Gas Tank

If you put various things in the gas tank other than the right fuel, then it will severely affect the car engine.

Below are a few things which, when put inside the gasoline tank, can have a bad effect on the engine and, finally, your car may shut down.

Putting Coca-Cola or other soft drinks inside the gasoline tank can severely damage the engine. When the ingredients of coke mix with gasoline, it creates a caustic sludge and blocks the engine. You will observe a lot of fumes coming from the car. Take your vehicle immediately to the mechanic shop if you accidentally put coke in the gas tank. Adding even a cap of water inside the tank can have an adverse effect on the engine. It will detach the engine from the engine mount. Your vehicle will run smoothly on the road, and then will suddenly it will stop.

It can be dangerous if your car suddenly stops on the highway. Some signs and symptoms will tell you that water is present in the tank, for instance, misfiring or rough acceleration.

#3. Pouring a Lot Of Engine Oil

The engine oil in the car should not be too high or too low. Adding too much engine oil can damage the vehicle permanently.

Adding bleach to the tank is quite dangerous. Bleach comprises water and chlorine, which are not good for the engine. It can corrode the entire engine components.

When you add a lot of salt to the tank, it will start slowly by corroding the bottom portion. The salt crystals will begin entering the fuel pump and block the filter. So the vehicle engine may stop running.

Adding sugar to the tank will block the fuel filter and permanently damage the engine. There are signs and symptoms when you have sugar in the tank, like poor fuel economy, a stalled engine, or the car will have starting problems.

If you pour a small amount of urine into the gas tank, it will not affect the engine much. But adding a glass of urine can damage the engine slowly.

Pouring a small amount of brake fluid will not affect the engine. But a larger amount can affect the oxygen sensors and cause damage to the catalytic converter and various vital components of the engine.

Hydrogen peroxide alone will not affect your engine. But when it is combined with gas, it can overheat the engine and permanently damage it.

The wrong fuel in the tank will ruin your engine. So, if you accidentally put the wrong fuel inside the gas tank, stop driving and take the car to a safe place. It’s best to take the help of a mechanic. #1. What’s the worst thing you could put in a gas tank

When you add bleach, sugar, hydrogen peroxide, or a lot of engine oil, it can severely affect your engine and permanently damage it.

You may experience car stalling, poor acceleration, starting problems, decreased mileage, and in worst cases, your vehicle suddenly stops in the middle of the road, which is dangerous.

#2. What happens if I put power steering fluid in my gas tank

If you put a small power steering fluid in the gas tank, it will burn along with fuel.

But pouring large amounts of steering fluid can cause a lot of smoke and hamper the engine.

Whenever your fuel injectors get dirty, it can cause the engine to misfire, which is dangerous.

Brake fluid helps remove dust, dirt, and grime from the injectors, But it cannot do a thorough cleaning.

Brake fluid is essential in the hydraulic braking system used in modern cars. But, the fluid is meant only for brakes, not the fuel system. So, if you accidentally put brake fluid in the petrol tank, flush it instantly; otherwise, it can damage engine components badly. Thank you for reading this article!