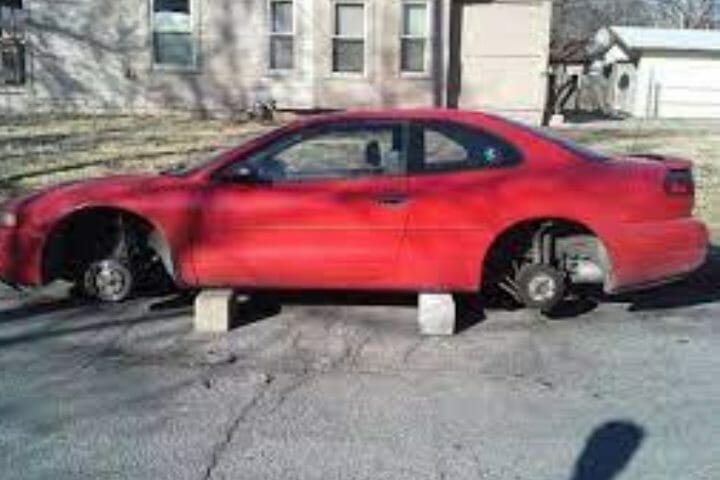 Are cinder blocks strong enough to prop up a car? Can I put my car on cinder blocks to do some work underneath it? We answer these questions below.

Once in a while, you might often need to go underneath your car to change the shockers or for some other job that needs to be done on the four brakes.

In both cases, you might need to lift your car completely above the ground. One idea that people find appealing is to prop up their cars on cinder blocks.

Unfortunately, placing your car on cinder or concrete blocks is suicidal. They are too fragile to take up the pressure of a car and might into the gravel. What Are Cinder Blocks, and How Are They Different From Concrete Blocks?

People often use the terms ‘cinder blocks’ and ‘concrete blocks’ interchangeably. But although they have similar functions and look alike, they are not the same.

The difference between cinder blocks and concrete blocks is mainly due to their different composition.

The main ingredient of Cinder blocks is ash. In earlier times, people used to burn coal and wood under their chimneys, which generated tons of ash waste. Manufacturers primarily made cinder blocks from this ash.

Besides, cinder blocks have low tensile strength. So, it is banned in many places for use in constructing bridges, buildings, and other load-bearing structures.

Cinder blocks are easily bowed and buckled. Pure cinder blocks have not been manufactured for almost 50 years, but concrete is often blended with cinder for utilizing it in some sectors. How Much Weight Can Cinder Blocks Hold?

According to the National Concrete Masonry Association, the standard weight that any cinder block must withstand is 1700 pounds per square inch.

Cinder blocks can hold weights spread across their surface better. A group of cinder blocks placed together performs more efficiently than a single block.

Can You Put Your Car on Cinder Blocks?

Be it concrete or cinder blocks, both are too fragile to jack up your car.

Let us say you need to check your car for an issue and place it on four cinder blocks, each one near each wheel. Whenever there is even the slightest vibration in your car, it will be prone to sliding off the front jack. The moment your car slides, the cinder blocks would get crushed under its pressure.

This could cause a serious accident, so it would be best not to use cinder or concrete blocks for the purpose.

Instead, you should always jack your car up on a concrete road with the help of a ramp, jack stands, or hydraulic lifts.

Can I Use Wood Blocks To Prop My Car?

It is not wise to place wood blocks to lift your car as they might crack and split, causing a disastrous accident. Always use a jack on a concrete floor for lifting the car.

You can use wood blocks in one place, though – they can be used as protection for the sheet metal or chassis while placing the car on jack stands.

You can place wood scraps to hold the car and prevent it from rolling off the stands. Using wood to stop the car from sliding is a good idea, as the parking brake is unreliable in such cases. Can I Use Floor Jacks?

No! A floor jack cannot lift and hold a car all by itself.

A floor jack works through hydraulic pressure on the slave cylinder present inside it, which has rubber seals for support. If even one of the rubber seals breaks, the jack can fail and collapse at any moment.

Instead of using floor jacks for lifting and supporting your car, you can place hydraulic jacks along with wooden blocks to support your car from slipping.

What’s The Safe Way To Raise My Car?

To Raise your car safely, you can follow the steps below:

Can I put my car on cinder blocks?

No, you should not put your car on cinder blocks. They are hollow blocks made of ash combined with other materials.

These lightweight blocks are too fragile to support your car and might break into pieces if, by any vibration, the chassis slips.

Why do people put bricks behind their wheels?

People often put bricks as wheel chocks behind their wheels.

Bricks are sturdy enough to use as chocks as the rubber tires spread the pressure across the brick. Bricks prevent the car from any accidental movement.

How do thieves steal wheels so fast?

Tire Thieves loosen the lug nuts and put an object underneath your car in the middle to act as a wedge. By doing this, they raise the tires in the air, which makes it very easy and fast to remove them and carry them off. What can I use instead of jack stands?

The best way to lift your car is on jack stands placed on a flat concrete floor.

Alternatives to jack stands could be either a ramp or a hydraulic lift. Ramps are helpful when the work is done in only one wheel, while hydraulic lifts are more efficient than jack stands.

Neither cinder blocks nor concrete blocks can support your car’s weight properly. It would help if you didn’t use any of them to raise your car.

Always raise your car using jack stands and support it with wooden blocks and scraps. Moreover, put the tires underneath the car to absorb the shock in case it still falls down.

Thank you for reading.