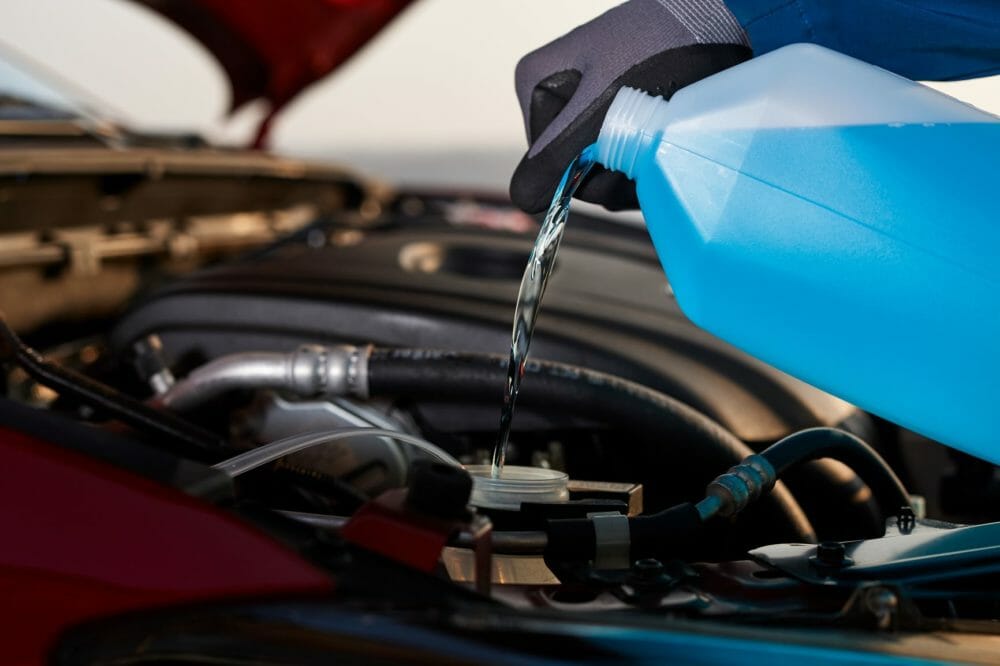 Antifreeze is a liquid that is mixed with water to increase the boiling point of an engine, ultimately preventing it from overheating as the outdoor temperatures change.

As a result of an increased boiling point, the coolant temperature will be higher. This coolant makes its way through the engine to ensure that a regulated temperature is maintained. To put it simply, antifreeze is intended to prevent the coolant from freezing during extreme temperatures.

Many would suggest that antifreeze smells rather sweet. Antifreeze that is yet to be diluted with water is going to smell quite a bit sweeter than diluted antifreeze.

It is important to recognize that the smell of antifreeze can change in particular situations.

While some may find it tempting to smell the antifreeze more regularly than recommended due to the unexpectedly sweet scent, it is important to familiarize yourself with the other type of smells that can be possible indicators of issues with your car. Antifreeze has a particularly high boiling point and can emit fumes that smell sweeter than normal antifreeze. You are likely to notice a presence of hot antifreeze entering through the air in the car making the smell a little easier to identify,

Antifreeze has a particularly high boiling point and can emit fumes that are sweeter in scent than normal antifreeze.

You are likely to notice a presence of hot antifreeze entering through the air in the car making the smell a little easier to identify, however, you are unlikely to be in direct contact with the fumes of the antifreeze to be able to distinguish the exact scent.

If you are a little unsure, you should expect hot antifreeze to smell slightly sweeter.

Antifreeze is also going to smell different following interaction with engine oil inside your car, something which shouldn’t happen intentionally.

The smell of the antifreeze is going to be milder when it has mixed with oil and could be an indicator that there are problems with the car that need to be looked into immediately.

If this should happen to your car, it could cause a significant amount of damage and the smell may not be as pungent or strong as you would expect.

If anything it is going to remain sweet but as mentioned not as strong as normal antifreeze and this can make the issues difficult to detect until severe damage has been done.

Are the fumes of antifreeze harmful?

Antifreeze should not be harmful if it is used as intended. As with any product, there is the risk of potential skin irritations if contact should occur and if consumed in excessive amounts, antifreeze can lead to a spectrum of severe health illnesses including heart problems and brain damage.

One of the main ingredients inside antifreeze is ethylene glycol and this can cause the eyes and respiratory tract to become irritated.

Although inhaling small amounts isn’t going to have such detrimental effects, despite the sweet smell seeming appealing you should avoid inhaling the fumes of this product due to the issues that can occur as a result of this.

How do you remove the smell of antifreeze from your engine?

There are some steps that you can take to remove the smell of antifreeze from your engine.

The use of Lysol spray is likely to be effective if used repeatedly until the smell has disappeared. This should be sprayed on the fresh air intake vent.

Why can I smell antifreeze inside my car?

This is typically an unnoticeable problem that only becomes prevalent when an issue has occurred. If your heater core has become damaged or has a leak, a particularly strong smell of antifreeze is going to be present through the vents of your car.

Once this odor is present in your car it is practically unnoticeable, hence why it can signify a severe issue that should be looked into to avoid further damage occurring while ensuring that the car is safe for you.

Why can I smell antifreeze outside of my car?

If the smell of antifreeze is prominent in the outdoor environment surrounding your car, it could be an indicator of many problems.

There is one of two places that this smell could be coming from and that is the radiator or heater hose. It may also be an issue with the cylinder head or possibly a failed gasket.

Antifreeze serves an important purpose inside a car. Antifreeze plays a crucial role in your car’s performance. Not only is it intended to keep the engine cool at a regulated temperature, but it also helps to ensure that your engine doesn’t become overheated.

Although the lack of antifreeze in your car isn’t going to cause it to become damaged immediately, over time it is likely to become problematic.

Some may find the sweet smell of the antifreeze solution to be fairly similar to the smell of syrup or other sweet products and although this can make it tempting to smell, doing so in excessive amounts can lead to severe health complications and so ideally, doing so should be avoided.

The smell of antifreeze can also come in useful for identifying several issues with your car. The severity of the smell is going to differ depending on the issue. As mentioned following interaction with heat the smell doesn’t differ dramatically and remains sweet but not hugely present in the atmosphere.

However, when the solution has mixed with engine oil the smell becomes easier to identify as it is milder than what it would typically be.

It is also possible that the smell of antifreeze could be a sign of a leak inside your car and this is particularly the case if you smell the product inside the cabin and surrounding the outside of the car too.